Some good news at last!
It has rained and the wells have water again

And the well for the Boys' Home is almost complete.

Click on any image to see a larger version

In May the TRUST Children Home received official registration as a children's home.  The paperwork and inspections to gain this approval for the Boys' Home are making progress.

The numbers continue to grow and there are now a total of 75 children and 15 support staff.

Much has happened in this last year! In November 2013 Thirumaran began looking for support to provide a well at the Boys' Home.  There was already an pit nearby and the plan was to use this as a starting point for a well.

Advice and quotations were sought. Wells here are usually storage tanks and not just one metre diameter holes. With a generous donation from a UK Charitable Trust Fund it was possible for a start to be made, at the end of December, on a well which was approximately 10 meters by 10 meters.

There was already a water shortage as there had been very poor rain for more than a year. This only increased the need for the well at the Boys' Home.

The digging has been through rock - the only positive side of this is that the rocks have been stored for future building projects!

The images show clearly the challenge faced by the men digging.

The well digging project has been a constant financial worry - alongside the concern and expense associated with the on-going drought, failing water supplies and the necessity to purchase water for day to day use.

By April the dry well hole had reached 45 feet deep. Two brave visitors from the UK were lowered into the space to see it at first hand.

By the end of June the depth was measured as 50 feet and presentations were made to the well diggers to celebrate their successful completion of this part of the project.

The considerable cost of digging this hole, plus the extra costs of day to day care of the children though the drought meant that the money ran out.  Again very generous donors came to the rescue and it has been possible to do the vital work of a wall around the well to make it safe. This seems to have involved scaffolding inside the well.

The pictures on the left and the one at the top show the well in November 2014. The boys looking into it give a good idea of scale!

It has rained (at last) and there is now water in the well.

Not just water, but Thirumaran has arranged to care for 2500 small fish in the water!

Click on any image to see a larger version 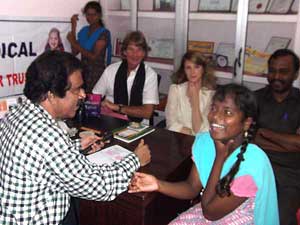